It has been a long time since our last post, but all along we've been busy trying to figure out a way to get back into the boating business with a Ghost Rider II.  We've actually been scouring the boat brokerage market since last October, and in that span we've been on at least 13 prospective boats.  One of those, a DeFever 53, caught our fancy. But after a very extensive survey and sea trial revealed some unanticipated issues, we decided to pass on it. So the search continues.

Nevertheless, in the midst of all the boat browsing we've been making preparations for a crossing of the Atlantic ocean on a Nordhavn 60, named Relish. The Nordy community is a tight one, and one where it's common to make new friends on a regular basis.  In this case we befriended a relatively new Nordhavn owner who, after buying the boat of his dreams here in the U.S., wants to get it back to his home waters in the Mediterranean.  And he needed some crew to help him do that.

Beginning in mid-May 2017 several Nordhavn trawlers will make the long trek across the Atlantic ocean....from the east coast of Florida to Gibraltar. We're calling this the "Nordhavn Atlantic Passage 2017", aka NAP.  And we're jazzed to be a part of it. 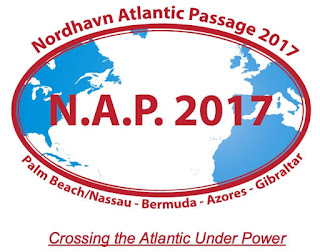 The total journey will traverse approximately 3,900 nautical miles of open ocean, and will take us about a month to complete.  Our schedule is noted below. Bernie Francis (see link here) is our group leader aboard the flagship. Bernie was also our mentor and trainer in the early days of our Nordhavn ownership experience.  Ideally, assuming no weather delays, the trans-Atlantic passage will be completed once all vessels arrive in Gibraltar on or about 16-June.

As we chug across the big pond we'll be able to post near-real-time tracking via our Garmin/Delorme inReach satellite device; plus Michelle and I will be one of the flotilla's bloggers.  We will post the web site URLs for both the tracking device and the NAP blog once we get those finalized.  In the interim, here is the general current crossing plan:
One oddity to note....while Palm Beach will be the departure point for most boats, our vessel (Relish) will actually be departing from Nassau on New Providence island in the Bahamas.  That will require us to depart on 15-May to intercept the other boats departing from Florida.

The owner and captain of Relish is Silvio Gentile, who resides in Lugano, Switzerland.  There are a number of circumstances that prevent Silvio from being present to supervise the preparations and provisioning of the boat at Yacht Tech's boatyard in Palm Beach, so Michelle and Rick are assisting with a few projects.

We'll have more to come on how we are preparing ourselves and the boat for the journey in the near future.  Stay tuned.
Posted by Rick at 11:18 AM 2 comments: